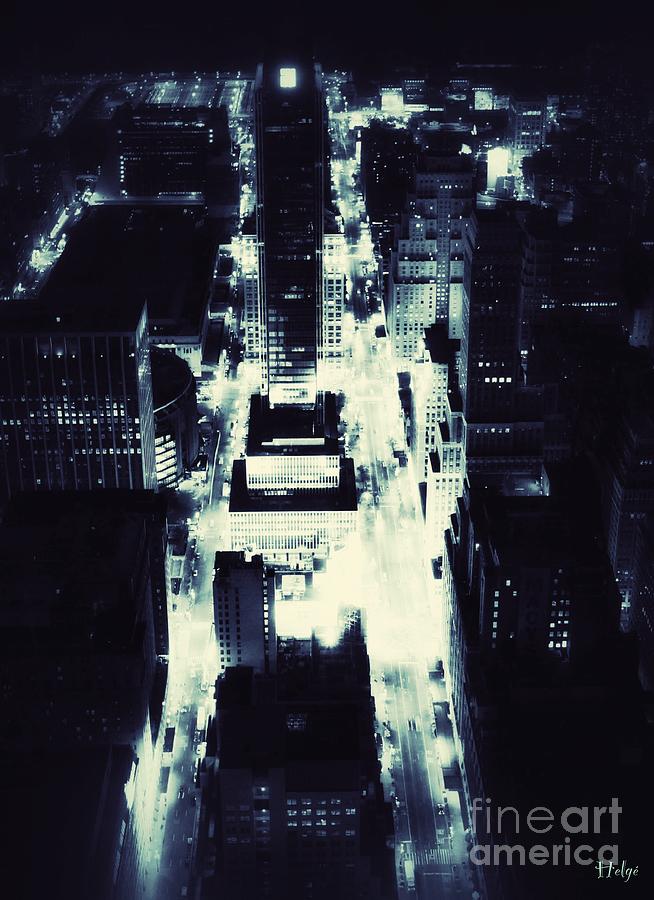 The picture was tooken from the empire state building, looking west, the 4th november 2012 during the night, few days after the Sandy storm.
The main building is the One Penn Plaza (33-34th street) near madison square garden and pearson park.

One Penn Plaza (1 Penn Plaza) is a skyscraper in New York City, located between 33rd Street and 34th Street, west of Seventh Avenue, and adjacent to Pennsylvania Station and Madison Square Garden. It is the tallest building in the Pennsylvania Plaza complex of office buildings, hotels, and entertainment facilities.
The skyscraper was designed by Kahn & Jacobs and completed in 1972. It reaches 750 feet (230 m) with 57 floors. The tower has three setbacks at 7th, 14th, and 55th floors. From its location on the west side of Manhattan, most south, west and north-facing tenants have unobstructed views of the Hudson River.
One Penn Plaza is currently owned by Vornado Realty Trust. It was previously owned by Helmsley-Spear Inc., which sold the building for $420 million in the late 1990s.
In 2009, plans were made to install a cogeneration plant in order to heat the building more efficiently. By 2010, it was reported that when the new plant was activated, it nearly cut the building's carbon output in half.
More than 80 percent of the action in the 2011 independent film Margin Call was shot on the 42nd floor of the building, which had recently been vacated by a trading firm.
One Penn Plaza is built with structural steel and concrete, with grey solar glass and anodized aluminum on the outside walls.
The building has 14 entrances and 44 elevators in seven banks. An underground parking garage provides 695 spaces for cars and is accessible from both 33rd and 34th Streets. Direct passageways at each end of the building provide underground connections to the Long Island Rail Road concourse of Pennsylvania Station, which is located one block to the south. The ground floor is leased to several commercial tenants, including the top floor of a 142,000 square feet (13,200 m2), three-story K-Mart store (formerly occupied by Woolworth), and a restaurant.
A public plaza and fountain are located on the west end of the building. Unlike traditional fountains, steam is dispensed in the winter and fog is dispensed in the summer to prevent water from splashing out during gusty wind conditions.

Thanks so much Josh to feature my artwork in the group Surprising Shots. https://fineartamerica.com/groups/surprising-shots.html

Thanks so much Kip to feature my artwork in the group The Best Photo Album.

Thanks so much Luther to feature my artwork in the group ABC Group B is for Blue. Greatly appreciated!

Congratulations,! Your artwork has been Featured by the - ABC GROUP B IS FOR BLUE themed week! You are invited to archive it in the Feature thread

In a Blog comment Hartmut Jager said he thought it looked like a bird, I told him it was not a bird and that it is not a plane, so that being the case it could be Superman.