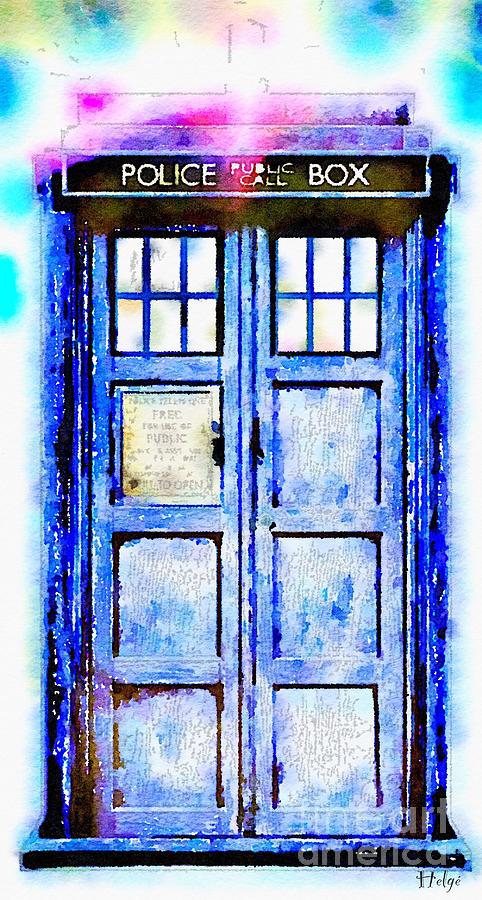 The TARDIS (Time and Relative Dimension in Space) is a time machine and spacecraft in the British science fiction television programme Doctor Who and its associated spin-offs The Sarah Jane Adventures, Torchwood and more.
A TARDIS is a product of the advanced technology of the Time Lords, an extraterrestrial civilisation to which the programme's central character, the Doctor, belongs. A properly maintained and piloted TARDIS can transport its occupants to any point in time and any place in the universe. The interior of a TARDIS is much larger than its exterior, which can blend in with its surroundings using the ship's "chameleon circuit". TARDISes also possess a degree of sentience (which has been expressed in a variety of ways ranging from implied machine personality and free will through to the use of a conversant avatar) and provide their users with additional tools and abilities including a telepathically based universal translation system.
In the series, the Doctor pilots an apparently unreliable, obsolete Type 40, Mark TARDIS. Its chameleon circuit is broken, leaving it stuck in the shape of a 1960s-style London police box after a visit to London in 1963. The Doctor's TARDIS was for most of the series' history said to have been stolen from the Time Lords' home planet, Gallifrey, where it was old, decommissioned and derelict. However, during the events of "The Doctor's Wife" (2011), the ship's consciousness briefly inhabits a human body named Idris, and she reveals that far from being stolen, she left of her own free will. During this episode, she flirtatiously implies that she "stole" the Doctor rather than the other way around, although she does also refer to him as her "thief" in the same episode.
The unpredictability of the TARDIS's short-range guidance (relative to the size of the Universe) has often been a plot point in the Doctor's travels. Also in "The Doctor's Wife", the TARDIS reveals that much of this "unpredictability" was actually intentional on its part in order to get the Doctor "where [he] needed to go" as opposed to where he "wanted to go".
Although "TARDIS" is a type of craft rather than a specific one, the Doctor's TARDIS is usually referred to as "the" TARDIS or, in some of the earlier serials, just as "the ship", "the blue box", "the capsule" or "the police box".
Doctor Who has become so much a part of British popular culture that not only has the shape of the police box become more immediately associated with the TARDIS than with its real-world inspiration, the term "TARDIS-like" has been used to describe anything that seems to be bigger on the inside than on the outside.