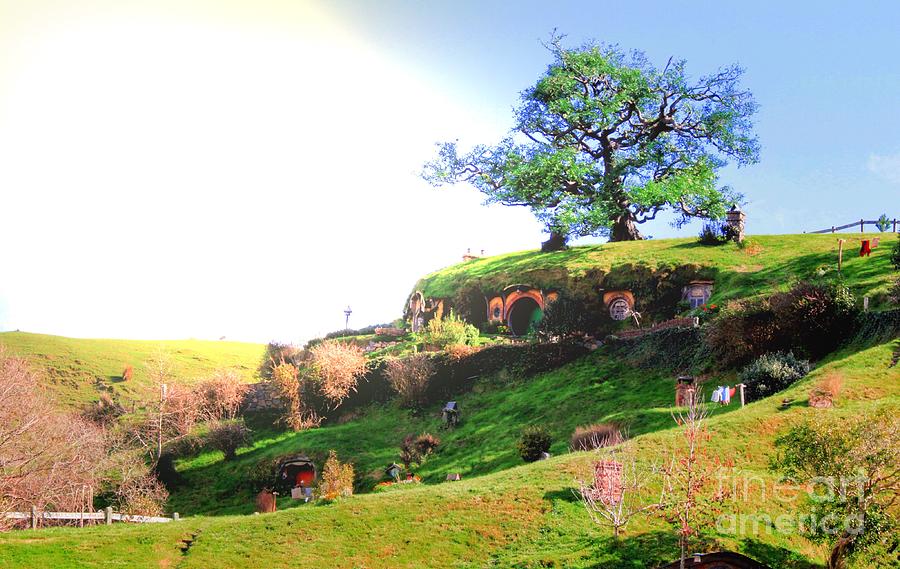 Bilbo's Tree in the sunlight

Bilbo's Tree in the sunlight

Bag End was a luxurious tunnel, or smial, on the north-side of Hobbiton built in to the top of The Hill, circa T.A. 2885, by the wealthy and respected Bungo Baggins of the same town's namesake as a wedding gift to his bride Belladonna Took, a daughter and one of numerous children of the Shire's Thain, the great Gerontius Took. The hole, where many parties took place, had one level with many rooms and cellars. Only rooms on the west had windows, which opened out like portholes onto a grassy slope and distant meadows beyond. The main entrance to the tunnel sat on the end of a westwardly hilltop gated path at the end of an anonymous lane, off of The Hill Road. Bungo and Belladonna died relatively young by Hobbit standards (in 2926 and 2934 respectively), having given birth to Bilbo, (born 2890), who became in his adult bachelorhood its first heir. The tunnel's main entrance connected outdoors by an informal path both to a rear door and a second path partway down the garden's slope to a low rise in a hedgerow and further on into hedgerow country.
Other than the anonymous lane's entrance pathway, The Hill Road's lone offshoot was Bagshot Row, just to the south of Bag End, a lane built on top of fill from spoil literally tossed over the south side of The Hill while Bag End was being excavated. Bilbo later added a potato garden to the western slope when Hamfast "Gaffer" Gamgee, of Number 3, Bagshot Row became its full-time gardener in T.A. 2961. The next-door neighbour to Gamgee was Daddy Twofoot of Number 2, Bagshot Row. Gamgee himself often employed Holman Greenhand who lived in a hut south of The Water.
The smial, or hole, which Bilbo would often lock and leave for days at a time, leaving the keys with the Gamgees, was unexpectedly visited by Gandalf and a party of Dwarves in T.A. 2941 causing Bilbo to suddenly disappear on the quest of Erebor, not returning until over a year later, where he was just in time to prevent its being auctioned.
In T.A. 2980 Bilbo eventually made an heir, his nephew from the Shire's east river country, master Frodo Baggins, an orphan by way of a highly controversial river boating/drowning accident. Born on the same date, Bilbo urged his junior nephew to reside with him so the two could celebrate their respective birthday parties together. The two lived at the smial until their joint birthday party of T.A. 3001 when Bilbo disappeared from the Shire, leaving Frodo the hole's master. A large disused field in front of Bagshot Row was leased by Bilbo to pitch tents to stage his disappearance.
Frodo himself left the Shire, in T.A. 3018, on his quest to destroy the One Ring. In preparation for this he sold the smial to his cousins, Lobelia Sackville-Baggins and her son Lotho. During the War of the Ring, the fallen wizard Saruman and his henchmen evicted Lobelia and murdered Lotho, taking Bag End for themselves. When Frodo returned to the Shire at the end of the War, the squatters were dealt with summarily, and Frodo resumed his residence. Samwise Gamgee soon moved in as well, together with his new wife Rose Cotton. However in only a few short years, Frodo left Middle-earth altogether, leaving Sam and his growing family as its masters for generations.
The author borrowed "Bag End" from the name of his aunt's farmhouse in the Worcestershire village of Dormston. It was supposedly intended as a translation of the word Labin-nec in the fictional Westron language. This had much the same meaning, and a similar relationship, to Labingi (the Westron form of Baggins) as Bag End to Baggins

Thank you buyer from Pittsburgh, PA. I hope you will enjoy this Shower Curtain.

Thank you buyer from Tallahassee, FL. I hope you will enjoy this Tapestry for many years.